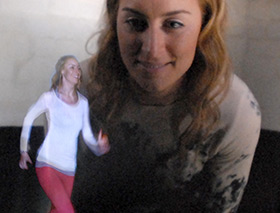 As part of our project help me obi we made a live remote 360 holographic video call to NetPol in La Corderie L'Arsenale at the Venice Architecture Biennale from an isolated bothy in Scotland.

In help me obi we have built a machine to create 360 degree moving video objects that float in space. Where the viewer is able to walk around the machine and see the video object from any position. The connection to the dislocated video object is visceral, your understanding of your relationship to yourself shifts. 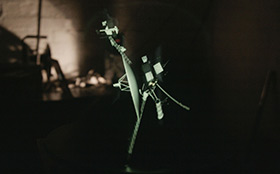 Referencing Princess Leia’s iconic appearance in Star Wars as a 3d moving holographic message, Help me Obi is an investigation of remote relationships, intimacy and dislocation.

As part of the work we show NASA's Voyager 1 Space Probe, the first man made object to leave the solar system and enter interstellar space.  At about 12 billion miles from earth it's the farthest manmade object from earth. When you stand there with it floating in front of you it has a life that you connect to in a very different way than you would with a film or video, or even a 3d film. This is what we mean by intimacy and dislocation, that your connection to voyager, the iconic messenger from earth, and the ideas it embodies become physical.

Voyager, as remote video object, lights up in your imagination when the viewer knows more of the background of Voyager and what has happened in the last few months the relationship the viewer has with the baby on the machine doesn't need any background information, it's instinctual, alive and an extraordinary experience.

ScotEDGE Winner 2015
made with the support of:
Creative Scotland